Life is full of hardships and difficulties. These experience are intentional and necessary, to simply teach us HUMILITY.

Humility is defined as, “A quality by which a person considering his own defects has a humble opinion of himself and willingly submits himself to God and to others for God’s sake.”

We have been created from dust, a sperm drop. By Allah(SWT)’s Mercy, Grace, Love and power we grow

physically and intellectually. This development is a test and as soon as we reach certain levels of strength, intellect,

Financial stability we grow in “kibr” (pride). We quickly lose track of our origin, the origin of a despicable liquid drop.

In that he looks upon himself as (Ghani) Independent/wealthy/self-sufficient. (S96V6-7)

As we grow in strength, honor, wealth, intellect…our mentality, routines, company…changes. We move up the ladder.

This is the true test of life. To grow in strength, to become a millionaire, a billionaire, a president, a professor…

And always bear in mind that it is Allah who is the greatest, that we are just mud molded into shape.

“Allah (mighty and sublime be He) said: Pride is My cloak and greatness My robe,

“Whoever possesses an atom’s weight of ‘kibr'(Pride/arrogance) will not enter into the paradise “. Muslim

And so it is, that Allah(SWT) full of loving kindness, allows us to experience difficult situations,

Most of which have been caused by our own hands. It is these situations that HUMBLE us,

These situations that show us how weak we really are. We cannot do anything to prevent

Cancer, an earthquake, death…As powerful and intelligent as we humans have become, we are yet sooooo

Vulnerable and truly it’s Allah(SWT) the One and Only that has power over all things and can do as He Pleases.

The most tragic event, is the tragedy of not learning humility through a humbling experience.

When calamity strikes, we are expected to reform, and mend our lives. Humility is not just a personality,

But a lifestyle. Humility is being simple and selfless in all we do. It’s treating with respect every creation of Allah(SWT).

Humility is simplicity and sincerity, in the way we talk, the company we keep, what we buy, the clothes we wear… 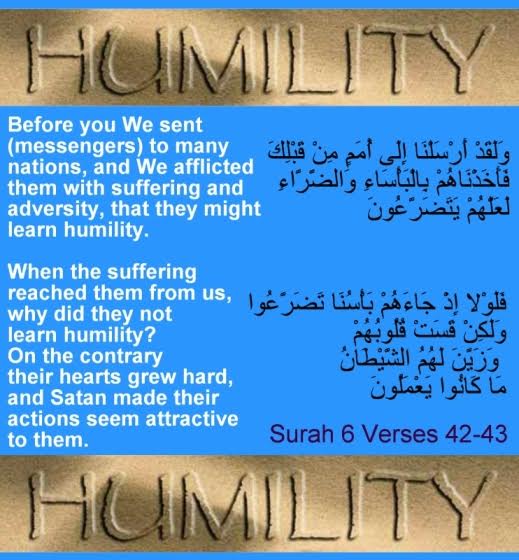 That Home of the Hereafter

We shall give to those who do not seek to exalt themselves in the Earth nor to cause corruption in it, 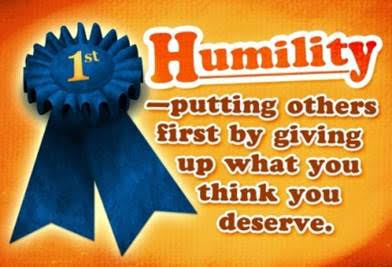 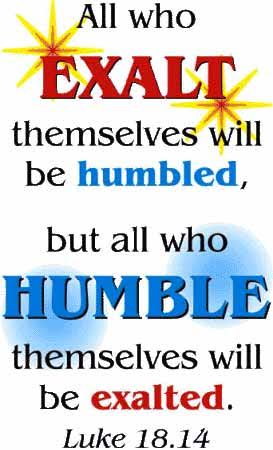 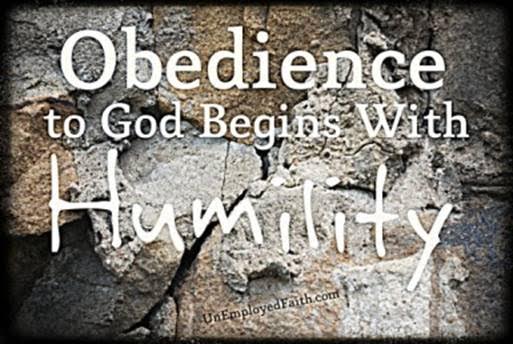 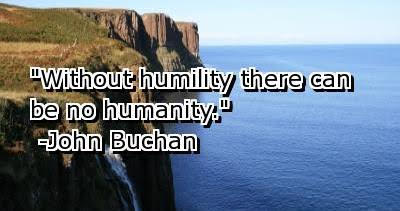 The bed of the Prophet

This is an incident of the 7th or 8th year of Islamic calendar, by this time the Prophet   had already become the undisputed leader of a large chunk of Arabia.

So Umar (R) could not control himself and began to cry, he said,

Instead of saying maybe you are right or I will think about it, the Prophet   rather got irritated at him. The Prophet  said,

O Umar, is this why we are here for? O Umar, aren’t you happy that they have this ‘Dunia’ (this life) and we have the ‘Akhira’ (the afterlife)?

So the Prophet   rebuked Umar by saying I am not here for this, I am not even thinking about this. Such was the simple life that the Prophet Muhammad   lead, despite having all the power to afford a lavish lifestyle.

One of the clearest examples of his humility, is that the Messenger of Allah (صلي الله عليه و سلم ) would sit in the Masjid with his companions and if a stranger or visitor came to the Masjid he wouldn’t know who the Prophet was until he asked, “Which one of you is Muhammad”? This is because he would not sit, dress, or be treated in a way that distinguished him from the people.

Anas Ibn Maalik would pass by a group of young boys playing and he would extend to them a warm and gracious greeting (salaams). When he was asked, “Why do you do this”? He replied, ‘The Prophet ( صلي الله عليه و سلم ) use to do it’. Bukhari/Muslim

Abdullah ibn Amr ( رضي الله تعا لي عنه )said: ‘The Prophet (صلي الله عليه و سلم ) entered upon me so I gave him a pillow (to sit on) made out of skin and filled with date palm fibers. The Prophet ( صلي الله عليه و سلم ) (refused to sit on it) and he choose to sit on the (bare) ground, and he left the cushion between him and myself’. Bukhari/Muslim

Aisha ( رضي الله تعا لي عنه ) was asked, ‘What did the Prophet (صلي الله عليه و سلم) use to do when he was in the privacy of his home’? She replied, ‘He use to be in the service of his family’. He used to repair his sandals and sew/patch his own thobe and he would milk the sheep. Bukhari

Anas ibn Maalik ( رضي الله تعا لي عنه ) said the Prophet (صلي الله عليه و سلم ) performed the Hajj upon an old camel that had a saddle that cost about four dirhams or less, and then he said, “Oh Allah, this is a Hajj (that I’m performing) wherein there is no showing off nor notoriety sought”. Tirmizi/Ibn Majah

May Allah(SWT) protect, preserve and purify our lives from pride, arrogance and extravagance,