A screw in the machinery of the Kuffaaar! Chapter 2 Verse 120

A screw in the machinery of the Kuffaaar! Chapter 2 Verse 120

Never will the Jews or the Christians be satisfied with thee unless thou follow their ways.

Say: “The Guidance of Allah,-that is the (only) Guidance.”

Wert thou to follow their desires after the knowledge which hath reached thee,

then wouldst thou find neither Protector nor helper against Allah.

“You will be raised with those whom you imitate”

The late Abdul Majid may Allah, grant him Peace in Jannah in nearness to him is reported to have said when leaving his job in an insurance company to teach and spread the message of the Quraan “I was a screw in the machinery of the Kuffaar” 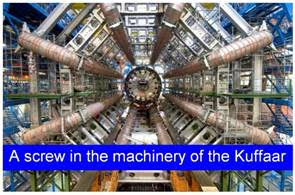 I have been wondering why the world is soooo chaotic. Prices of food, clothing, stuff is gone sooo expensive, life is getting harder and harder. One cannot watch any news broadcast without some riot somewhere as people take to the streets to vent their frustrations as they battle to cope with the stress of financial doom.

We have the Quraan and the example of the Prophet(SAW) and yet as the Muslim Ummah, we are powerless. The justly balanced ummah that is suppose to be witness’s over humanity(Surah 2 Verse 143) seem asleep.

Then it struck me, most of us have been converted, nope, not to Christianity, nor to Judaism, but to “their ways”. How can we protect the planet and all it’s inhabitants if we have become part of the problem. “Their Ways”, their lifestyle.

Our lifestyle is distinct and theirs too

The Hijaab is so distinct, full of honor,

The mini, bikini, tight fitting clothes is so raw and full of attraction

Halaal food, food over which Allah(SWT)’s name is taken is full of blessing and is distinct.

Islamic finance is distinct, no interest, no undue increase,

The Western finance is amazing, every time my rent is a day late they charge interest. Rentals go up for no reason other than greed. The past few decades we have seen this greed take on new meaning, leading to the greatest disaster the world has seen. Cyprus had to take money from it’s citizens accounts without permission to service it’s debt, by force of the borrowers.

Are we those that focus sooo much on ourselves that we have no time, no love, no concern for the rest of creation, serving only our self interests?

It’s not just our actions that should be protected from straying away from Islam but our mentality too.

Recently I re-visited a book I read years ago, “The International Jew”, by Henry Ford. In it he discusses the protocols of Zion and expands on their effect on America.

Among the various strategies to gain control of the world, 2 concepts are repeated quite often, concepts that once infiltrate our minds become a cancer

In Islam there are liberties, but simply within limits.

There is “broad mindedness” but not with regard to the laws of Our Creator, Allah to whom belong all Praise and Glory…

May Allah(SWT) makes us proudly, distinct Muslims that are well pleased with the greatest gift He has given us, a complete lifestyle as guided by the Quraan and exemplified by our beloved Rasool(SAW) – Deen Al Islam!

Say: “The Guidance of Allah,-that is the (only) Guidance.”